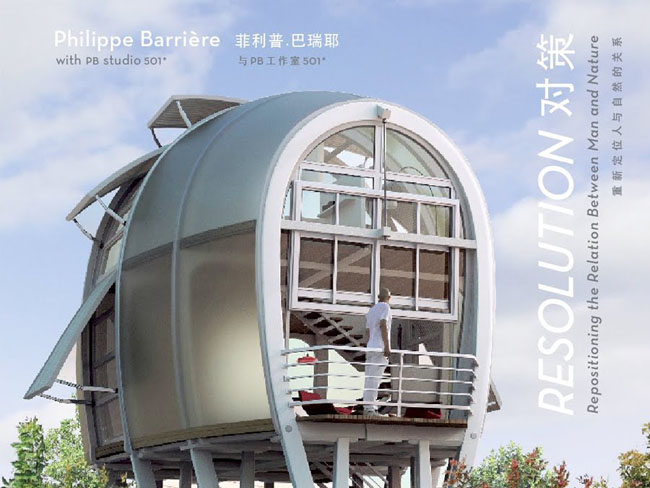 « 1. The work presented in this book is visionary, in particular by seeming as if based in reality, and vice versa. It takes on the contradictions of today without being so naive as to try to surmount them, and without being so cynical as to merely parody them. The work acknowledges that we are what we consume, and it takes responsibility for this. A given: a hardscape of asphalt parking lots, antediluvian industrial buildings, space-devouring superhighways. What now? A given: inhospitable swamplands, poisonous brownfields. A given: people displaced from their homes, uprooted, with no shelter. What now?

These are terrifying problems, truly haunting problems that will not disappear, even with all the digital prestidigitation in the world. These problems crave resolutions that show intense imagination and allow for delicate healing. The name for such an approach to architecture is realism. Philippe Barriere is its magician and surgeon. –Joan Ockman, historian, critic, educator, former director of the Buell Center for the Study ‘radical’ of American Architecture at Columbia University.

2. The truly beautiful projects gathered in this book are singular augmentations of the landscape, as found and as built. Each adds not simply an architectural supplement but some social enlargement that changes our view of place. Philippe Barriere strides with gentle, elegant, resolution across the field of life, punctuating the environment with moments of brilliant and mysterious precision. –Michael Sorkin, Architect, Contributing Editor for Architectural Record, I.D., and Metropolis.

3. The architecture of Philippe Barriere magically attaches itself to the commonplace: confronting, enlarging and transforming our understanding of the world and ultimately ourselves. The forms and ideas displayed in this book are the result of a highly learned yet personal architectural research and recovers the idea of the architect as public provocateur…read it slowly and carefully so as not to miss a thing! –William Menking, Executive editor, the Architects’ Newspaper »