The Field School in Built Heritage and Cultural Landscapes examines the ways the culture of a region is expressed through local architecture, with special focus on its religious heritage. The 2008 Edition of the Field School returned to St-Pierre Barachois (Catholic) and St-Peter’s Malbay (Anglican) parishes in the Gaspe to document and interpret the two churches, the former St-Pierre school, and St-Peter’s Malbay Church Hall and parsonage, all component parts of the parish cores, as well as three small missionary chapels. Students and instructors experimented with a variety of field survey techniques to record the historic buildings. They also conducted interviews with parishioners, worked with local stakeholders to propose the adaptive reuse of two key parish buildings, and even attended local gatherings and social events. An exhibition of the students’ work, which showcased the projects and the empirical research on which they were based, concluded this three week intensive course. 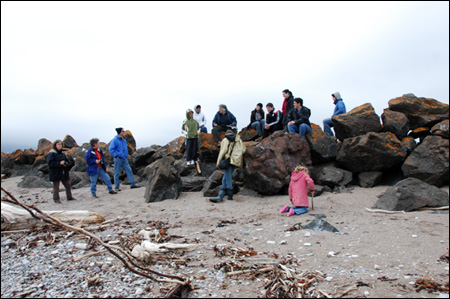 Lucie Lagueux speaking to students and professors about the ecology of the Barachois. Photo : Tania Martin Local instructors spoke with students and instructors about the culture, history and ecology of the Gaspe. Jules Bélanger, an eminent historian of the region, described the settlement patterns of numerous immigrant groups that fashioned the socioeconomic structures centered primarily on the fishing industry that have persisted in the region until recently. Biology professor Lucie Lagueux took the group out into and around the barachois explaining the complex ecological processes that shape this exceptional regional ecosystem teaming with wildlife. Such landscape features not only add to the natural beauty of the Gaspe, they also act as nurseries that help replenish the rich marine life found off the coast. It was this biodiversity that attracted people to the area. Each of the Christian communities in the Gaspe established their own house of worship. Religious denomination also corresponded to social class for many years. Members of the Anglican Church, many of whom trace their ancestors to Jersey and Guernsey, frequently held management positions in the fisheries. In contrast, the Irish- and French-Canadian fishermen and their families generally attended Catholic Mass. 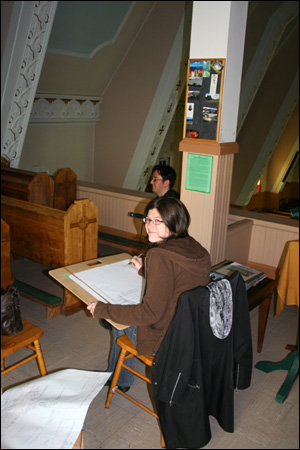 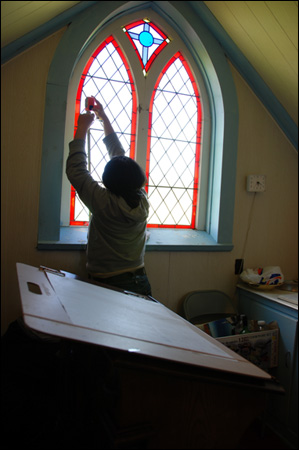 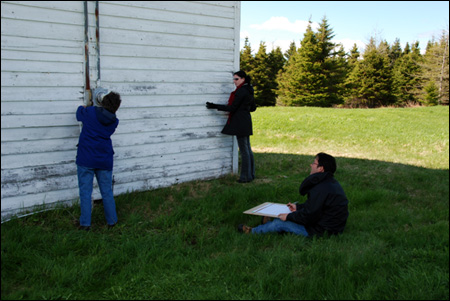 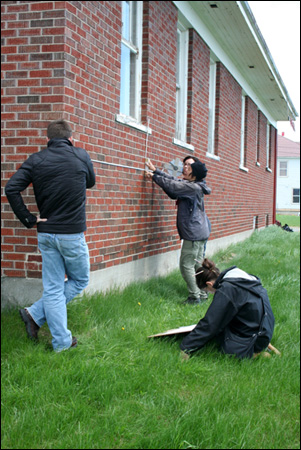 Measuring an exterior wall of the former St-Pierre Barachois School. Photo : John Wood Field recording comprises one of the main activities of the course. The documentation process invites close observation of the buildings and sites. This year, students and professors produced sections and elevations of Saint-Pierre Barachois Catholic and St-Peter’s Malbay Anglican churches, which completed the plans drawn during last year’s edition of the field school. In addition, course participants recorded the plans, sections, and elevations of St-Peter’s Malbay Church Hall and the former Saint-Pierre Barachois School. Archival documents, including copies of historic photographs, maps, and written accounts gathered from public and private archives prior to the course, proved essential to understanding the evolution of the parish buildings. 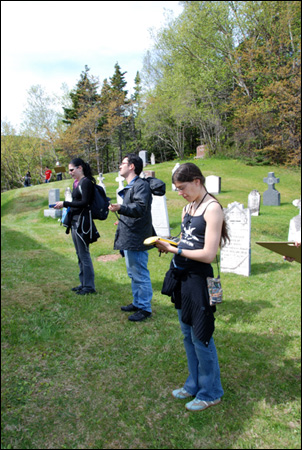 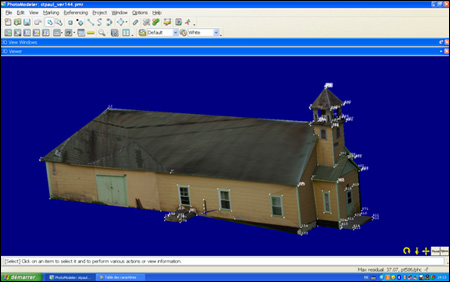 Using photogrammetry techniques and specialized software, students created a three-dimensional virtual model using wide-angle photographs of Saint-Paul chapel, Bridgeville. Students and instructors also employed technologically sophisticated techniques, such as GPS and photogrammetry, to document three missionary chapels: Saint-Paul associated with Saint-Pierre, Barachois and St-Luke’s and St-Paul’s associated with St-Peter’s Malbay. In so doing, they were able to extend their comparative analysis between religious traditions to look at questions of cultural geography. 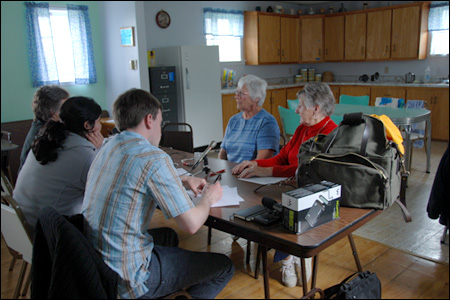 Students conducting interviews of Theresa Joseph and Anita Heggison, parishioners of Saint-Pierre Barachois, at the Mountainview Golden Age Club. Photo: Tania Martin One cannot fully appreciate the buildings and sites under study without being immersed in the cultural landscape of the Gaspe or without talking to the people who inhabit the region throughout the year. The students, with the assistance of the professors, therefore conducted interviews with the parishioners of both Christian communities. The conversations revolved around the ways parishioners make use of the buildings making up the parish cores, the religious practices that take place in them, as well as events that profoundly marked the lives of the inhabitants of the region and the significant changes in daily life over the years. The exchanges helped students understand the meanings people attribute to the religious buildings and the significance they attach to parish activities. 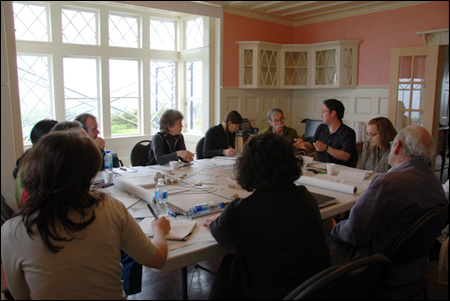 Group discussion and brainstorming session for adaptive reuse proposals for the Church Hall at St-Peter’s Malbay. Photo : Tania Martin Participants in this year’s edition of the field school worked with local stakeholders to develop adaptive reuse strategies for one building in each of the parish cores. Local historians, members of municipal, provincial and federal government, cultural and heritage agencies, interns at the architecture firm Vachon et Roy as well as parishioners all took part in the group discussions and brainstorming sessions that took place at the Villa James in Percé. One team proposed renovating the St-Peter’s Malbay Church Hall to house a genealogical research center in a way that did not interfere with the hosting of community and festive activities while the other team proposed converting the former Saint-Pierre Barachois School into a regional ornithological research center, an interpretive center for the barachois and a day center for seniors, all in ways that complemented existing community facilities. Students drew plans and sections and built scale models to represent the proposals for each of the sites. 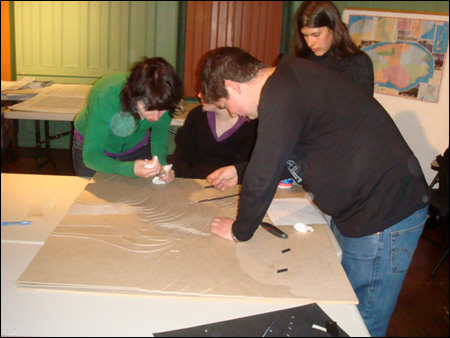 Students assembling one of the site models. Photo : Michael Doyle The construction of site models and building models instrumental in such participative design processes were greatly facilitated by a newly acquired Zund Precision Cutter, a state-of-the-art machine acquired jointly by the Canada Research Chair in Built Religious Heritage through a Canadian Foundation for Innovation Grant and the Université Laval School of Architecture, through the student investment fund. Once the students had generated the necessary AutoCAD files of the individual pieces of the scale models at Percé, they emailed the files to the machine operator in Québec City who then manipulated the files using specialized software that tells the machine where to cut the cardboard. He shipped the pieces of the Church Hall and the former Saint-Pierre School models back to Percé for assembly, all in time for the day-long workshop with local stakeholders. 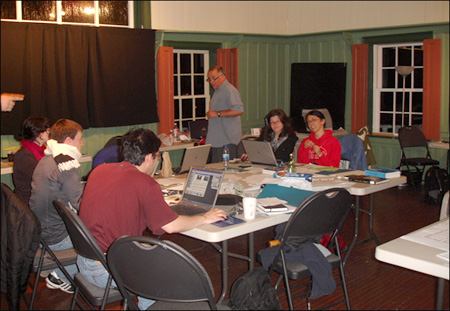 Students and professors in the studio working late into the night to prepare the posters for the exhibition. Photo : Rozhen Mohammed-Amin All of the work produced during the three weeks—the documentation and interpretation of the evolution of parish buildings and the proposed interventions—were presented in a series of posters exhibited to the community at the end of the field school. 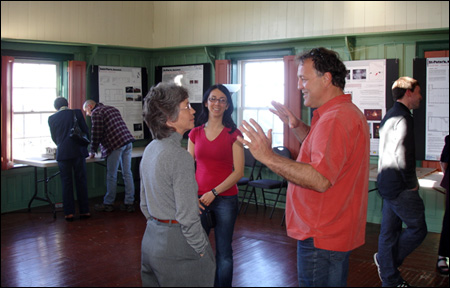 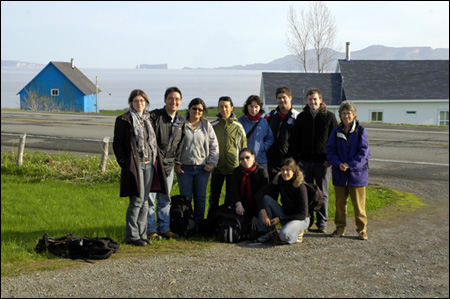